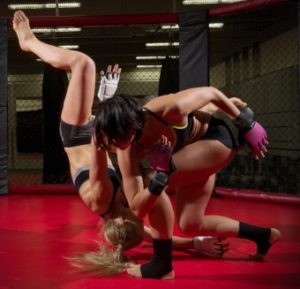 As Sasha Banks rolled up to AT&T Stadium in Texas in the days before WrestleMania last year, she was amazed to see images of herself, Charlotte Flair and Becky Lynch in the center of a massive banner with men’s wrestlers on either side of them.

“I never in my whole life thought that I’d see the women right in the middle representing WWE,” said Banks, who got out of the vehicle to take a photo.

“To think that the company had that much faith to highlight us along with the men on the stadium, it was surreal,” Flair recalled. “And it makes you want to work that much harder.”

WrestleMania 32 was the last time the company used the term “Diva” to describe its female talent, instead opting to use “Superstars,” the word it uses to describe its male performers. The championship belt with the pinkish butterfly was replaced.

From a change in philosophy in recruiting and developing women to the trending hashtag #GiveDivasAChance from angry fans in reaction to a 30-second women’s match in February 2015, to the Divas Revolution to the Women’s Evolution to elite-level performers now among the most popular athletes within WWE’s three brands, women’s wrestling has undergone a metamorphosis. Another potential inflection point is ahead Sunday at WrestleMania 33 in Orlando ( 7 p.m. ET, WWE Network).