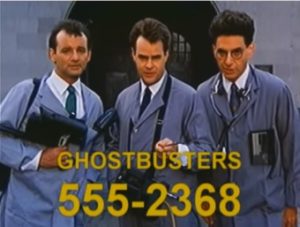 As soon as an actor in a movie or TV show starts rattling off a phone number, every viewer knows what the first three digits will be: 5-5-5. How did “555” become the convention for fake phone numbers, and are there any real 555 numbers? Let’s dial up some answers.

Why do TV and movies need the fake 555 numbers? Just ask anyone who had the misfortune of having the number 867-5309 how their life changed after Tommy Tutone’s 15 minutes of fame. Apparently some tiny fraction of the population—we’re guessing a fraction that largely consists of adolescent boys—thinks it’s hilarious to call any number they see on the screen. To curb these nuisance calls, movies and shows have been using the fake 555 numbers since as far back as the 1950s. (In keeping with the old exchange-naming convention, back then it was “KLondike 5” or “KLamath 5.”)

It’s hard to pin down exactly how 555 became the go-to fake prefix for phone numbers. In the book Easy as Pi: The Countless Ways We Use Numbers Every Day, author Jamie Buchan speculates that the repeated digit may have made the combination memorable, which helped it gain traction. Buchan adds that since no major place names in the United States began with a combination of the letters J, K, and L (the letters assigned to the 5 key on a phone), the KLondike/KLamath prefix wasn’t exactly a coveted commodity.