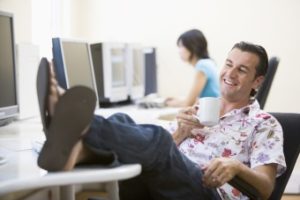 writing for The Atlantic

Americans began the 20th century in bustles and bowler hats and ended it in velour sweatsuits and flannel shirts—the most radical shift in dress standards in human history. At the center of this sartorial revolution was business casual, a genre of dress that broke the last bastion of formality—office attire—to redefine the American wardrobe.

Born in Silicon Valley in the early 1980s, business casual consists of khaki pants, sensible shoes, and button-down collared shirts. By the time it was mainstream, in the 1990s, it flummoxed HR managers and employees alike. “Welcome to the confusing world of business casual,” declared a fashion writer for the Chicago Tribune in 1995. With time and some coaching, people caught on. Today, though, the term “business casual” is nearly obsolete for describing the clothing of a workforce that includes many who work from home in yoga pants, put on a clean T-shirt for a Skype meeting, and don’t always go into the office.