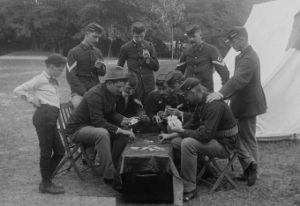 The game we know as poker is believed to have ancient roots that go back nearly 1,000 years, crossing several continents and cultures. Some historians say poker’s origins can be traced to a domino-card game played by a 10th-century Chinese emperor; others claim it is a descendant of the Persian card game “As Nas,” which dates back to the 16th century. Poker’s closest European predecessor was Poque, which caught on in France in the 17th century. Poque and its German equivalent, pochen, were both based on the 16th-century Spanish game primero, which featured three cards dealt to each player and bluffing (or betting high on poor cards) as a key part of the game. French colonists brought Poque to their settlements in North America, including New Orleans and the surrounding area, which became part of the United States thanks to the Louisiana Purchase of 1803. English-speaking settlers in the region Anglicized Poque to poker and adopted features of the modern game, including five cards for each player and (by 1834) a 52-card deck.