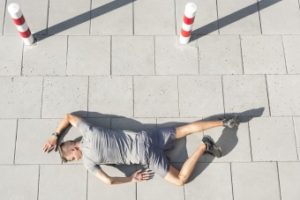 Americans as a whole don’t exercise enough—at least that’s what the latest studies show—and so the message is clear: get more active, take walks, Let’s Move! Basically anything is better than sitting on the couch. But how much exercise is enough? That’s a hotly debated question for which experts still don’t have a satisfactory answer. But given that most of us are starting from a sedentary position, the assumption has long been the more the better.

But in a report published Monday in the Journal of the American College of Cardiology researchers from Denmark say that people who push their bodies too hard may essentially undo the benefit of exercise. Those who ran at a fast pace more than four hours a week for more than three days a week had about the same risk of dying during the study’s 12-year follow up as those who were sedentary and hardly exercised at all. The link held even after the researchers accounted for potentially confounding factors such as age, sex, whether the participants had a history of heart disease or diabetes, or whether they smoked and drank alcohol.