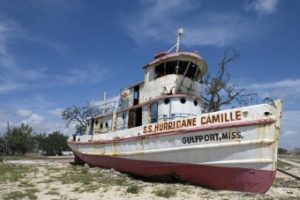 Wind speed, cost, deaths, intensity, and width are some of the ways to define the largest hurricane. If using wind speed, intensity, or width as the definition, it is necessary to explain whether the measurement was recorded at landfall or was the highest measurement recorded in the hurricane’s life cycle.

The largest loss of life from a hurricane is often caused bystorm surge and flooding rather than the winds. Do not underestimate a lower category hurricane! None of the top five deadliest hurricanes in United States history were a Category 5 hurricane at landfall.

The Great Galveston Hurricane of 1900 was the deadliest hurricane to ever hit the United States and caused between 8000 and 12000 deaths. The storm reached the Texas coast south of Galveston on September 8 as a Category 4 hurricane with a storm surge of 8 to 15 feet. The lack of warning and the high storm surge caused this storm to have the highest death toll of any United States hurricane.