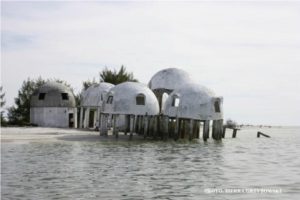 CAPE ROMANO, Fla. — An abandoned coastal home whose land has been claimed by the sea may find new life as an artificial reef.

The dome home, built by Bob and Margaret Lee starting in 1980, is a local landmark and an otherworldly tourist attraction to those who can get near it, generally by boat. But hurricanes that broke its windows, scoured its concrete and eroded its beach have turned the originally eco-friendly house into an eyesore, said Wayne Hasson, founder and president of the Naples, Fla.-based Oceans for Youth.

“Eventually, they’re going to be all the way in the sea,” he said of the geodesic domes that once were. “Now’s the best time to get these things moved. They’re useless where they are.”