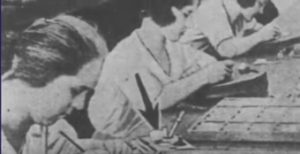 The Radium Girls were so contaminated that if you stood over their graves today with a Geiger counter, the radiation levels would still cause the needles to jump more than 80 years later. They were small-town girls from New Jersey who had been hired by a local factory to paint the clock faces of luminous watches, the latest new army gadget used by American soldiers. The women were told that the glow-in-the-dark radioactive paint was harmless, and so they painted 250 dials a day, licking their brushes every few strokes with their lips and tongue to give them a fine point.

They were paid the modern equivalent of $0.27 per watch dial, so the harder they worked, unknowingly swallowing deadly amounts of poison each time to make a few extra pennies, the faster death would approach. In their downtime, some even messed about painting their nails, teeth and faces with the luminous paint, marketed under the brand name “UnDark”.