By Ian Crouch The New Yorker 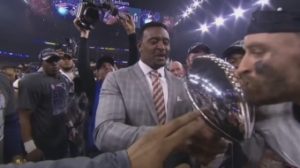 Halfway through the third quarter of the Super Bowl, after the Atlanta Falcons scored a touchdown to go ahead 28–3 over a dazed-looking New England Patriots team, it appeared that the entertainment value of the game had peaked at halftime, when Lady Gaga dove off the roof of Houston’s NRG Stadium. The Falcons’ offense, led by their quarterback, Matt Ryan, was moving the ball as easily as it had all season; the Patriots, meanwhile, were making uncharacteristic mistakes. The announcers started reaching for filler, and the owner of the Falcons, Arthur Blank, travelled from his luxury box down to the sideline, the better to celebrate with his team. It was, as the TV talking head Skip Bayless declared on Twitter for history to remember, all over.

Instead, in the course of a frenzied Patriots comeback, which ended with the team’s 34–28 win in overtime, this year’s Super Bowl joined an inner circle of the most exciting championship games ever played. It was a night of records. It was the first game in the fifty-one-year history of the Super Bowl to go to overtime, and the first to feature a comeback of greater than ten points. The Patriots’ Tom Brady attempted more passes and threw for more yards than anyone else in Super Bowl history, and won his fifth title, a record among quarterbacks. Brady’s season had begun with a four-game suspension, imposed by the league for his role in the Deflategate scandal. He ended the year as the Super Bowl M.V.P. After the game, the N.F.L. commissioner, Roger Goodell, met by a lusty hail of boos from the Patriots fans in the crowd, handed the Super Bowl trophy to the team’s owner, Robert Kraft. Goodell was also seen seeking out Brady to shake his hand. The cameras found him saying something to the man he’d suspended—it looked like he said “That was awesome.”