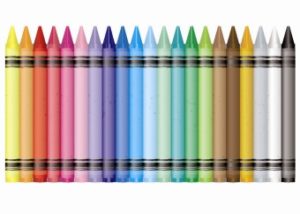 Binney & Smith was an outgrowth of a company begun in Peekskill, New York in 1864 by Joseph W. Binney, the father of the man who would become part of Binney & Smith. The first product sold by Binney’s company, Peekskill Chemical Works, was known as lampblack. It was ground and packaged charcoal that could be used as a coloring pigment in inks and paints.

The chemical company was so successful that in 1880 Joseph decided to open a sales office in New York City. At that time, he was joined by his nephew, C. Harold Smith (1860-1931) who had recently emigrated from New Zealand, and one of his sons Edwin (1866-1934).

By this time, the company was also selling a rust-colored paint that was made from iron oxide. It was frequently used as a protective paint on barns, and became known as “barn red.”

In 1885 Joseph retired, and the two younger men formed their own partnership, Binney & Smith, to carry the company forward. They were a perfect team. Smith was a very comfortable and successful salesman, and Binney enjoyed working with the chemists and experimenting with new products.