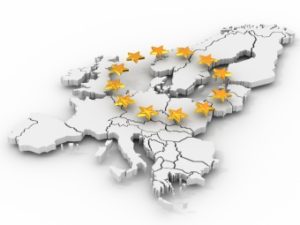 The European Union (EU) was created by the Maastricht Treaty on November 1st 1993. It is a political and economic union between European countries which makes its own policies concerning the members’ economies, societies, laws and to some extent security. To some, the EU is an overblown bureaucracy which drains money and compromises the power of sovereign states. For others, the EU is the best way to meet challenges smaller nations might struggle with – such as economic growth or negotiations with larger nations – and worth surrendering some sovereignty to achieve.
Despite many years of integration, opposition remains strong, but states have acted pragmatically, at times, to create the union.

Origins of the EU

The European Union was not created in one go by the Maastricht Treaty, but was the result of gradual integration since 1945, an evolution when one level of union has been seen to work, giving confidence and impetus for a next level.