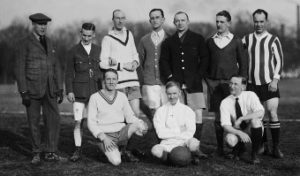 long history. Football in its current form arose in England in the middle of the 19th Century. But alternative versions of the game existed much earlier and are a part of the football history.

Early history and the precursors of football

The first known examples of a team game involving a ball, which was made out of a rock, occurred in old Mesoamerican cultures for over 3000 years ago. According to the sources, the ball would symbolize the sun and the captain of the losing team would be sacrificed to the gods.

The first known ball game which also involved kicking took place In China in the 3rd and 2nd century BC under the name Cuju. Cuju was played with a round ball on an area of a square. It later spread to Japan and was practiced under ceremonial forms.

Other earlier variety of ball games had been known from Ancient Greece. The ball was made by shreds of leather filled with hair. The first documents of balls filled with air are from the 7th century. In the Ancient Rome, games with balls were not included in the entertainment on the big arenas, but could occur in exercises in the military. It was the Roman culture that would bring football to the British island (Britannica). It is, however, uncertain in which degree the British people were influenced by this variability and in which degree they had developed their own variants.

The game of football takes its form