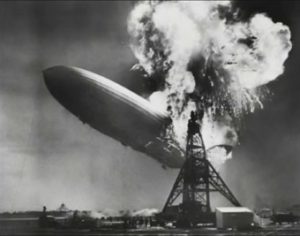 On May 6, 1937, the German airship Hindenburg burst into flames while attempting to land at Lakehurst, New Jersey. In little more than 30 seconds, the largest object ever to soar through the air was incinerated and the era of commercial airship travel was dead. Explore nine surprising facts about the massive zeppelin and its fiery demise.

1. Survivors of the Hindenburg disaster far outnumbered the victims.
Anyone who has seen the graphic newsreel video of the Hindenburg plunging to earth in flames may be amazed to know that of the 97 passengers and crew on board, 62 survived. The disaster’s 36 deaths included 13 passengers, 22 crewmembers and one worker on the ground. Many survivors jumped out of the zeppelin’s windows and ran away as fast as they could.