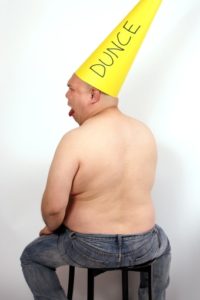 The dunce cap has long been a visual symbol of idiocy and punishment, but was once seen as something closer to a wizard’s hat. While today we understand the goofy-looking cone hat as denoting some kind of intellectual failing, it actually began as a symbol of respected scholars.

The origin of the dunce cap all begins with one man, John Duns Scotus. His incredible tri-part name, signaling his Scottish heritage(Scotus), and the village where he was born (Duns), is what would eventually lead to the very concept of a “dunce.”

Scotus was a renaissance man centuries before the Renaissance even took place. His exact birthdate is unknown, but he became a Franciscan priest in March of 1291, when he was probably in his twenties. He later went on to become a master philosopher, linguist, theologian, and metaphysical thinker.