BY Brett & Kate McKay |writing for The Art of Manliness 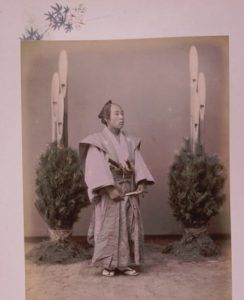 It was a time of carnage and darkness: the Age of Wars, when the land was torn by bloodshed and the only law was the law of the sword. A peasant wandered the countryside alone, seeking his fortune, without a coin in his pocket. He longed to become the epitome of refined manhood — a samurai — but nothing in the demeanor of this five-foot-tall, one-hundred-ten-pound boy could possibly have foretold the astounding destiny awaiting him. His name was Hideyoshi, and on that fateful spring evening in the year 1553, the brash young warlord Nobunaga hired him as a sandal-bearer. Driven by a relentless desire to transcend his peasant roots, Hideyoshi went on to become Nobunaga’s loyal protégé and right-hand man. Ultimately he became the supreme ruler of all Japan — the first peasant ever to rise to the absolute height of power — and unified a nation torn apart by more than a hundred years of civil strife.

Hideyoshi’s true story has inspired countless novels, plays, movies — even video games — for more than four centuries. Born the weakling son of a poor farmer at a time when martial prowess or entry to the priesthood were the only ways for an ambitious commoner to escape a life of backbreaking farm toil, he rose from poverty to rule a mighty nation and command hundreds of thousands of samurai warriors. For generations of men, Hideyoshi became the ultimate underdog hero: a symbol of the possibility of reinventing oneself as a man and rising, Horatio Alger fashion, from rags to riches. Hideyoshi was driven by a burning desire to succeed as a samurai. But he differed from his contemporaries in seeking to overcome his adversaries peaceably, through negotiation and alliance building rather than through brute force. Lacking physical strength and fighting skills, he naturally chose to rely on wits rather than weapons, on strategy over swords. An unlikely samurai,indeed. Or was he?

A Brief History of the Samurai