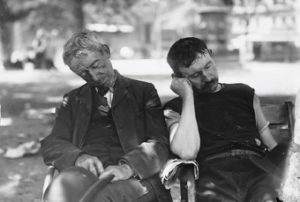 The July 1911 heat wave killed thousands of New Englanders and sent many over the brink of madness.

During 11 hellish days, horses dropped in the street. Babies didn’t wake up from their naps. Boats in Providence Harbor oozed pitch and began to take on water. Tar in the streets bubbled like hot syrup. Trees shed their leaves, grass turned to dust and cows’ milk started to dry up.

In every major northeastern city, the sweltering heat drove people to suicide.

On July 4, temperatures hit 103 in Portland, 104 in Boston (a record that still stands), 105 in Vernon, Vt., and 106 in Nashua, N.H., and Bangor, Maine. At least 200 died from drowning, trying to cool off in rivers, lakes, ponds and ocean – anything wet. Still more died from heat stroke. The 1911 heat wave was possibly the worst weather disaster in New England’s history, with estimates of the death toll as high as 2,000.