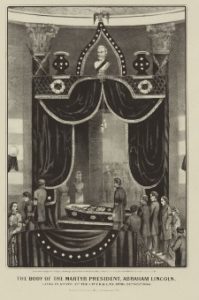 In the 1870’s one of the nation’s largest counterfeiting rings was headquartered in central Illinois. Problems arose for the gang when Ben Boyd, the gang’s master engraver, was imprisoned. Soon their supply of counterfeit money was almost gone. The gang needed an idea for freeing Ben Boyd. Therefore, “Big Jim” Kinealy, the crew’s leader, hatched a plot to steal Abraham Lincoln’s body. President Lincoln’s remains would be held as ransom until the government paid $200,000 in gold and freed Ben Boyd.

One night in Springfield one of Kinealy’s conspirators drank too much and revealed the entire plot to a woman. She told some others, and the story soon spread throughout the entire town. The gang of grave robbers fled the city.