by Mike Barnes, The Hollywood Reporter 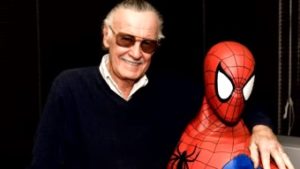 The feisty writer, editor and publisher was responsible for such iconic characters as Spider-Man, the X-Men, Thor, Iron Man, Black Panther and the Fantastic Four — ’nuff said.
Stan Lee, the legendary writer, editor and publisher of Marvel Comics whose fantabulous but flawed creations made him a real-life superhero to comic book lovers everywhere, has died. He was 95. Lee, who began in the business in 1939 and created or co-created Black Panther, Spider-Man, the X-Men, the Mighty Thor, Iron Man, the Fantastic Four, the Incredible Hulk, Daredevil and Ant-Man, among countless other characters, died early Monday morning at Cedars-Sinai Medical Center in Los Angeles, a family representative told The Hollywood Reporter.

Lee’s final few years were tumultuous. After Joan, his wife of 69 years, died in July 2017, he sued executives at POW! Entertainment — a company he founded in 2001 to develop film, TV and video game properties — for $1 billion alleging fraud, then abruptly dropped the suit weeks later. He also sued his ex-business manager and filed for a restraining order against a man who had been handling his affairs. (Lee’s estate is estimated to be worth as much as $70 million.) And in June 2018, it was revealed that the Los Angeles Police Department had been investigating reports of elder abuse against him.