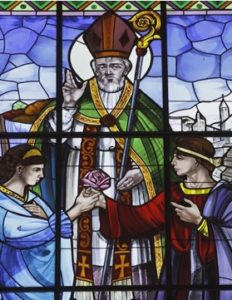 Flowers, candy, red hearts and romance. That’s what Valentine’s day is all about, right? Well, maybe not.

The origin of this holiday for the expression of love really isn’t romantic at all—at least not in the traditional sense. Father Frank O’Gara of Whitefriars Street Church in Dublin, Ireland, tells the real story of the man behind the holiday—St. Valentine.

“He was a Roman Priest at a time when there was an emperor called Claudias who persecuted the church at that particular time,” Father O’Gara explains. ” He also had an edict that prohibited the marriage of young people. This was based on the hypothesis that unmarried soldiers fought better than married soldiers because married soldiers might be afraid of what might happen to them or their wives or families if they died.”