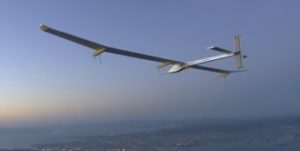 The sun-powered Solar Impulse 2 plane left the USA for Europe early Monday, one of the most challenging trips in its more than year-long trek around the world without using any jet fuel or emitting pollution.

The plane, which took off from John F. Kennedy airport in New York City, will fly non-stop across the Atlantic Ocean to land in Seville, Spain, on June 23.

Pilots and Swiss adventurers Andre Borschberg and Bertrand Piccard, who set out last year to circumnavigate the globe fueled only by the sun, alternate legs of the journey. Piccard is at the controls of the plane for the New York City to Spain leg.

The first leg of the around-the-world tour began in March 2015 in Abu Dhabi. It continued with several flights across Asia before Borschberg completed the world’s longest non-stop solo flight, a four-day, 21-hour and 52-minute excursion from Japan to Hawaii last summer.

CLICK TO READ THE ENTIRE ARTICLE AND SEE THE VIDEO