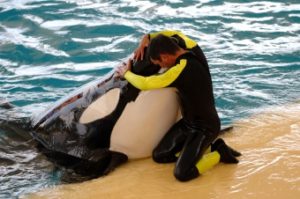 Blackfish, the documentary released in 2013, was highly critical of keeping whales in captivity. It generated plenty of attention about the plight of orcas, especially those under the care of the SeaWorld parks. Backlash from the film combined with other factors caused the marine life theme parks to take on water. Attendance and revenues plunged, while PR headaches rose.

In April 2015, SeaWorld brought in a new captain, Joel K. Manby, to right its listing ship. Prior to becoming president and CEO, he led the theme park and entertainment company, Herschend Enterprises. Among the parks under Manby’s guidance wereDollywood in Tennessee and Wild Adventures in Georgia.

After trying unsuccessfully to wage a proactive PR campaign and maintain the status quo, Manby and his SeaWorld team decided to halt their orca-breeding program and make changes to the whale stadium shows, moving from an entertainment focus to an educational one. The struggling company made the about-face announcement in March 2016.