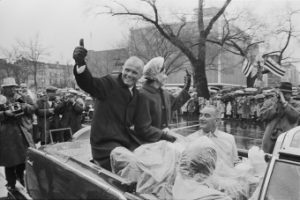 Glenn, who served four terms as a U.S. senator from Ohio, was one of NASA’s original seven Mercury astronauts. His flight on Friendship 7 on Feb. 20, 1962, showed the world that America was a serious contender in the space race with the Soviet Union. It also made Glenn an instant hero.

His mission of almost nine days on the space shuttle orbiter Discovery, launched Oct. 29, 1998, when he was 77, made him the oldest human to venture into space. On Discovery he participated in a series of tests on the aging process. The aging population was one focus of his work as a U.S. senator.

Glenn was described as “humble, funny, and generous” by Trevor Brown, dean of the John Glenn School of Public Affairs at Ohio State University, in a statement joined by the Glenn family. “Even after leaving public life, he loved to meet with citizens, school children in particular.  He thrilled to music and had a weakness for chocolate.”