By CARA BUCKLEY and BROOKS BARNES 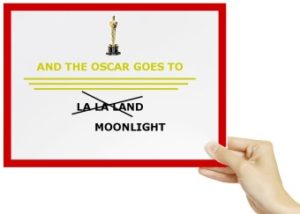 Jordan Horowitz knew something was wrong the moment he saw people in headsets scurrying across the Oscars stage.

Only a minute earlier Faye Dunaway had said the words that Mr. Horowitz had longed to hear — “La La Land” — as she announced the winner for the 2017 Academy Award for best picture. Mr. Horowitz, a producer on the film, and colleagues and cast members raced to the stage. Mr. Horowitz spoke first — “Thank you to the academy,” he began — but his excitement quickly dissipated, as he recalled the shocking end to the night in an interview with The New York Times after the awards.

“I’m holding the envelope and the award, and I had just given my speech, and there are people on the stage with headsets, and I thought, ‘That doesn’t seem right,’” Mr. Horowitz said at the Governors Ball.

“They asked to see my envelope, which I haven’t opened. Clearly something was wrong. They open my envelope, and it says ‘Emma Stone, La La Land.’ So clearly something is not right. The guys in headsets were going around with urgency looking for the other envelope — it just kind of appeared,” he said. “One of the guys opens it, and it says ‘Moonlight,’ and I took it onstage and went to the microphone and said what I said.