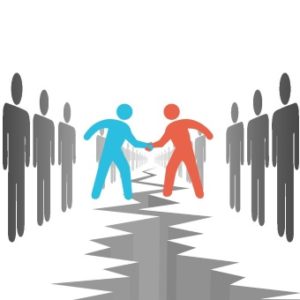 HARRISONBURG, Va. – Sheila Kloefkorn is a liberal, gay marketing executive in crimson-red Arizona who had a falling out with her family over the 2016 election. Greg Steinbrecher is a conservative aspiring actor from navy-blue California who has been labeled a “Nazi” by his friends for his right-of-center views.

For both, finding a way to lower the heat in a nation reaching a boil on political discourse is more than just a worthy ideal, it’s something worth fixing.

That’s why they and more than 150 other optimists from across the USA gathered at a small college in rural Virginia this month to chart a course for civil dialogue in a country of people constantly shouting at one another online and in person.

Kloefkorn and Steinbrecher joined the founding convention of an organization called Better Angels, formed by blue and red voters after Donald Trump’s election a year and a half ago.