By Georgia Kral writing for AM New York 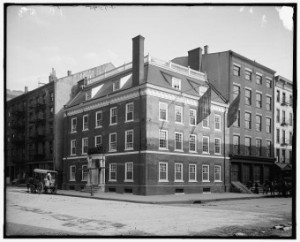 In New York City, staying on top of the hottest new restaurants can be like an Olympic sport. Rushing to get a table and eat at the best new spot is a cutthroat game.

But true restaurant lovers also appreciate the good old standbys — restaurants that have been open for decades or even a hundred years.

Sometime between 1762 and 1767 in lower Manhattan, Fraunces Tavern began serving ale and food. It has not been a functioning restaurant in the entire time since, however. The historic building was home to prominent New Yorkers, is called the oldest building in Manhattan by the Sons of the Revolution, was host to the secret society the Sons of Liberty and is a site on the New York Freedom Trail. Today, it’s a tavern again, serving Colonial style shepherd’s pie, tomahawk steaks for two and raw oysters (of course). It is also the home of the Fraunces Tavern Museum.

Fun Fact: Gen. George Washington dined at Fraunces Tavern with his officers in the Continental Army on Dec. 4, 1783, after the British withdrew from New York.