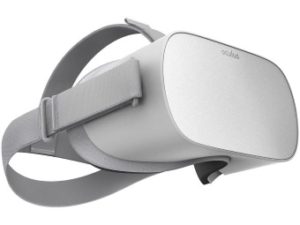 or the past few years, consumer virtual reality headsets have mostly come in two flavors: tethered headsets that connect to a computer or console, and mobile ones that are powered by a smartphone. That’s starting to change, and one of the major catalysts is the Oculus Go headset, which launches today in nearly two dozen countries. The Oculus Go is one of a few big “standalone” virtual reality headsets, a category that includes the upcoming Lenovo Mirage Solo and Oculus’ own Santa Cruz prototype. It’s not the flashiest or most high-tech headset on the market. But it’s the best that simple mobile VR has ever been, and it gives fledgling VR apps and games space to stand on their own, without having to compete for space on people’s phones.

Unlike the Oculus Santa Cruz, the Oculus Go doesn’t include full motion controllers or futuristic inside-out tracking technology, which lets users walk around rooms with no external cameras. It allows you to rotate your head, but not lean or walk around. You can move its small controller like a laser pointer, but not fully mimic a virtual hand. It’s got basically the same features as Samsung and Oculus’ Gear VR, but as a dedicated piece of hardware, not a combination of smartphone and plastic shell.