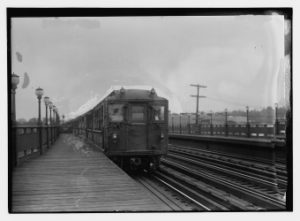 At 2:35 on the afternoon of October 27, 1904, New York City Mayor George McClellan takes the controls on the inaugural run of the city’s innovative new rapid transit system: the subway.

While London boasts the world’s oldest underground train network (opened in 1863) and Boston built the first subway in the United States in 1897, the New York City subway soon became the largest American system. The first line, operated by the Interborough Rapid Transit Company (IRT), traveled 9.1 miles through 28 stations. Running from City Hall in lower Manhattan to Grand Central Terminal in midtown, and then heading west along 42nd Street to Times Square, the line finished by zipping north, all the way to 145th Street and Broadway in Harlem. On opening day, Mayor McClellan so enjoyed his stint as engineer that he stayed at the controls all the way from City Hall to 103rd Street.