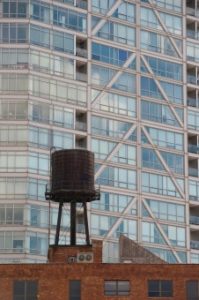 For over 100 years, water towers have been a seamless part of New York City’s skyline. So seamless, in fact, they often go unnoticed, usually overshadowed by their glassy supertall neighbors. While these wooden relics look like a thing of the past, the same type of water pumping structure continues to be built today, originating from just three family-run companies, two of which have been operating for nearly this entire century-long history. With up to 17,000 water tanks scattered throughout NYC, 6sqft decided to explore these icons, from their history and construction to modern projects that are bringing the structures into the mainstream.

When the Dutch settled New York City they found an island rich with waterways and natural streams. However, as the city’s industrial sector grew, so did its polluted waters. With no proper drainage system, standing pools of grime would form in the streets. The harm of these unsanitary conditions was not revealed until a group of wealthy New Yorkers formed the Citizens Association of New York to focus on public health reform. After the group’s survey revealed dangerously unhygienic conditions, a campaign was launched to improve the quality of water and people’s access to it.