Forty years ago, the Voyager 1 and 2 missions began their journey from 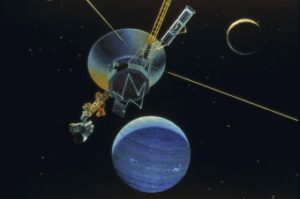 Earth to become the farthest-reaching missions in history. In the course of their missions, the two probes spent the next two decades sailing past the gas giants of Jupiter and Saturn. And while Voyager 1 then ventured into the outer Solar System, Voyager 2 swung by Uranus and Neptune, becoming the first and only probe in history to explore these worlds.

This summer, the probes will be marking the fortieth anniversary of their launch – on September 5th and August 20th, respectively. Despite having traveled for so long and reaching such considerable distances from Earth, the probes are still in contact with NASA and sending back valuable data. So in addition to being the most distant missions from Earth, they are the longest-running mission in history.

In addition to their distance and longevity, the Voyager spacecraft have also set numerous other records for robotic space missions. For example, in 2012, the Voyager 1 probe became the first and only spacecraft to have entered interstellar space. Voyage 2, meanwhile, is the only probe that has explored all four of the Solar System’s gas/ice giants – Jupiter, Saturn, Uranus and Neptune.