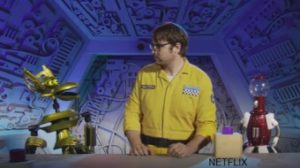 The crowdfunded 14-episode revival season of Mystery Science Theater 3000, the ’90s cult favorite about making fun of bad movies with your robot pals, will officially hit Netflix on April 14. The show’s deal with Netflix was announced by series creator Joel Hodgsonlast summer, and Hodgson revealed the launch date to the project’s Kickstarter backers early this morning. Production wrapped on the new season back in October, and in recent weeks, small groups of Kickstarter backers have gotten to see the premiere episode at a handful of “Red Carpet Kickstarter Screening” events.

The crowdfunded MST3K revival project was announced in late 2015, and it managed to raise $6.3 million in Kickstarter pledges and other donations. The size of the project and the show’s enduring popularity 16 years after its cancellation attracted some reasonably big-name talent to the project both in front of and behind the camera, including Felicia Day and Patton Oswalt as series regulars and a list of guest stars that includes Jack Black, Joel McHale, Jerry Seinfeld, and Mark Hamill. Jonah Ray, the show’s new host, was already an established comedian when he was hired, and the show’s head writer, Elliott Kalan, was also the head writer for the Jon Stewart-era Daily Show and co-hosts the successful Flop Housefilm podcast on the Maximum Fun network.