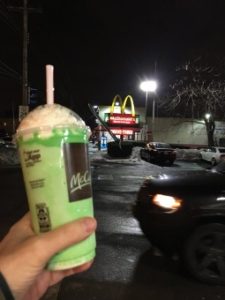 McDonald’s is bringing back its classic Shamrock Shake to celebrate St. Patrick’s Day, but banish the thought of another run for the four chocolate-infused variants that it introduced last year. It’s mere blarney.

The minty Shamrock, a short-time fixture at the Golden Arches since it was introduced in 1970, returns Feb. 21 and will become as rare as a four-leaf clover after St. Patrick’s Day, March. 17.

In a high-tech touch, this year McDonald’s is introducing an official Shamrock Shake Finder app for smartphones.