by Rich McCormick writing for The Verge 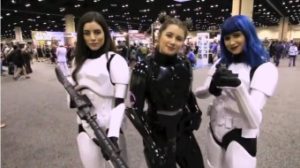 If you’ve been on the internet anytime in the last five years, you’re no doubt aware of the Star Wars brand free-for-all that is today, May 4th. Dubbed Star Wars Day, it’s a time for fans to celebrate their love for the biggest movie series of all time — and for cartoon bears to dress up as Rebel princesses in an awkward attempt to sell you more toilet paper. But despite the barrage of tie-ins and awkward corporate tweets, or the years of fast food restaurants, candy makers, and car manufacturers co-opting beloved imagery, there’s actually something noble at the heart of it all. Because unlike some over-commercialized Hallmark holidays, Star Wars Day wasn’t simply cooked up by companies to drain you of your cash.

Well, not at first, anyway.

The tradition started rather organically, chosen by fans as a day to celebrate their love for the Star Wars movies and expanded universe. (“May the Fourth” rhymes with “May the Force,” and you can figure out the rest out from there.) Grassroots fandom perpetuated the pun, until the first large organized event for the day took place on May 4th, 2011 in the Toronto Underground Cinema. Screenings of the movies were accompanied by a costume contest judged by local radio hosts and TV stars, but while it may have been the first commercial Star Wars Day gathering, it certainly wasn’t the first time people had connected the day with the films.