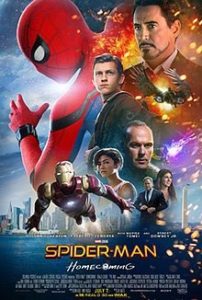 Spider-Man is dealing with a situation he’s never had before on the big screen: remembering the corsage for his homecoming date.

It’s a muggy August night and Tom Holland, the new Spidey who made his debut in last year’s Captain America: Civil War, is sitting in a rusty burgundy Volvo with Marisa Tomei in front of a cushy home. It’s a major scene being filmed for Spider-Man: Homecoming (in theaters Thursday night), and Holland’s Peter Parker is being dropped off by his Aunt May (Tomei) for his first date with longtime crush Liz (Laura Harrier).

This is a 15-year-old kid who has stolen Cap’s iconic shield and pretty much singlehandedly took down Giant-Man, so sliding a flower on a girl’s wrist shouldn’t be that nerve-wracking, right? But Homecoming is breaking from the five previous Spidey movies by focusing more on the travails of being a teenager than battling the supervillain du jour. (Though Holland’s fresh-faced web slinger has one of those, too.)