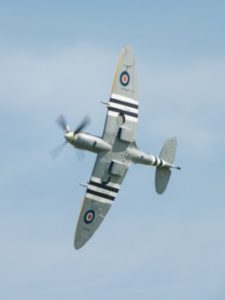 The dazzlingly authentic and up-close aerial dogfights between British Spitfires and German planes are among the most awe-inspiring scenes in director Christopher Nolan’s Dunkirk.

Shooting the furious flying action with real planes, often over the location of the pivotal Battle of Dunkirk, was challenging enough without computer effects or green-screen technology.

But mastering the feat with bulky IMAX cameras that brought vivid images and expansive field of view to the large screen was a victory that compelled Smithsonian’s Air & Space magazine to say: Dunkirk boasts “some of the most thrilling aerial engagements ever staged.”

Here’s how Nolan and his team pulled them off:

Yes, those are real Spitfires

Three working World War II Spitfires were brought in to depict much of action for the RAF pilots played by Tom Hardy and Jack Lowden.

“Most of what’s in the film was done with real Spitfires,” says Nolan. “The planes are in incredible condition and can do all the dogfighting, all the aerobatics. They are remarkable machines.”