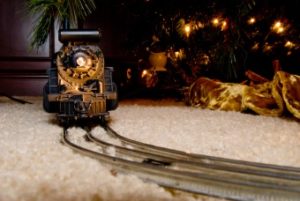 Model trains have been the Christmas delight of youngsters for many generations.  From the most primitive replicas of the “iron horse” in the 1800s to the most sophisticated railroad sets of the today, trains have remained atop the Christmas lists of both the young and old.

Many boys and girls who were introduced to trains as young children have never lost their fascination with them, and still enjoy settling in to recapture childhood fantasies on a cold winter’s day at home.  For some, trains conjure up images of mystery and adventure while other folks simply enjoy the engineering challenges of the railroad era.

Steam engine trains and locomotives were not invented until the 1800s, but the basic idea of trains dates back much further in time.  The ancient Romans developed a paved railway system for beast-drawn wagons.  Then later, in the coal mining regions of England, horse-drawn wagons were built on the same basic idea to carry coal from the mines to river loading sites.  Both of these are the predecessors of the modern trains of today.

During the 1800s, our countryside was laced with railroad tracks, bridging vast territories and making it possible for America to grow and prosper as a large united nation.  Towns sprang up along these railways, and people all across America had the easy opportunity to relocate and build new lives anywhere they chose.  The railroad provided easy means of transportation for both goods and services and quickly became “the heartbeat of America.”   Toymakers saw the potential market for model trains, as people everywhere were wanting a little piece of the action.  Soon miniature replicas of these giant trains appeared on storekeepers shelves everywhere, especially during the Christmas Season.