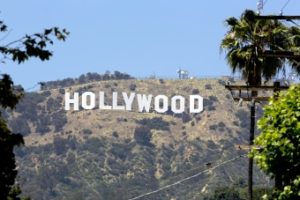 Hollywood was established in 1853, with a single adobe hut on land outside Los Angeles, California. Growing crops was so successful there that by 1870, Hollywood became a thriving agricultural community.

One of its most notable historic figures was real estate tycoon, Harvey Henderson Wilcox and his wife, Daeida, who moved to Los Angeles fromTopeka, Kansas, in the 1880s. Wilcox, having lost the use of his legs from a bout with typhoid fever prior to moving out west, bought 160 acres of land west of the city, at the foothills near the Cahuenga Pass.

The town’s name came from Daeida, who, while on a train trip east met a woman that described her country home in Ohio, that had been named for the Dutch settlement of Hollywood. Liking the name, Daeida christened their ranch “Hollywood,” upon her return.