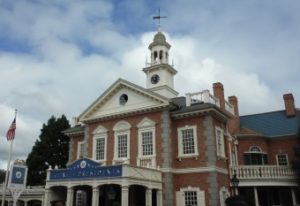 (soon to be 45) United States Presidents.  The exterior of the show building is a reduced size replica of Philadelphia, Pennsylvania’s Independence Hall, where the founding fathers met to write the Constitution.   The numerals 1787, the year of the Constitutional Convention, are prominently featured high on the outside of the attraction building.

When the attraction opened on the opening day of Magic Kingdom the show featured the then 37 U.S. Presidents including then current President Richard Nixon.  With each new president, a new Audio-Animatronic look-alike President is added to the show and given a small speech voiced by the actual president.