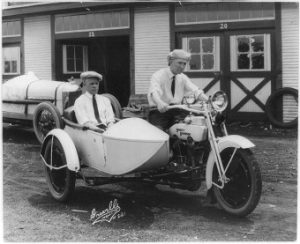 A Discovery Channel miniseries about the creation of the iconic Harley-Davidson motorcycle company offered a perk to its stars: the chance to ride modern re-creations of the company’s early bikes.

Michiel Huisman (Game of Thrones), who plays one of the company’s founders in the three-part Harley and the Davidsons (Sept. 5-7, 9 ET/PT), talked about the fun early motorcycles, with engines designed from scratch, at the Television Critics Association summer press tour Monday.

“I was lucky enough to ride replicas of bikes that don’t exist anymore, or they’re behind glass at the Harley-Davidson Museum in Milwaukee,” he says, adding he rode motorcycles in his 20s. “They were great fun to ride and very challenging to ride, but I think compared to the (originals). they were probably really smooth.”