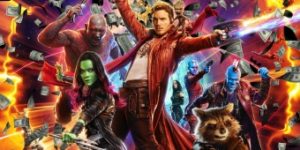 Just like the first one, Guardians of the Galaxy Vol. 2is a winning and wonderfully relatable gem of crazy.

The creative mind of writer/director James Gunn comes alive again in this hysterical and surprisingly touching sequel (***½ out of four; rated PG-13; in theaters May 5) filled with misfits saving the universe once more, a guy who’s a living planet, a cosmic biker gang with loyalty issues and people pinballing through space like Bugs Bunny cartoons on fast-forward.

It’s missing some of the ragtag underdog charm of 2014’s instaclassic Guardians that made it one of the best Marvel efforts ever. Yet Vol. 2 becomes in its own way a more confident and well-rounded movie by experimenting with character relationships, familial rivalry and its own successful template.

After their universe-rescuing victory in the original film, the Guardians are hired to take down a vicious space monster by Ayesha (Elizabeth Debicki), the egotistical high priestess of an upper-crust alien race called the Sovereign. Peter Quill (Chris Pratt) and Gamora (Zoe Saldana) bicker about their choice of weaponry, Drax (Dave Bautista) and talking raccoon Rocket (voiced by Bradley Cooper) whup some creature butt with extreme prejudice, and everybody’s just trying to make sure cute little alien tree Baby Groot (voiced by Vin Diesel) doesn’t get eaten by the aforementioned snarling beast.