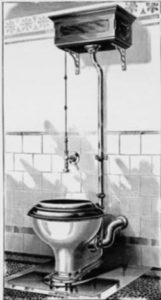 In a catalog assembled for the 2014 Venice Biennale to accompany an exhibition on architectural elements, the bathroom is referred to as “the architectural space in which bodies are replenished, inspected, and cultivated, and where one is left alone for private reflection – to develop and affirm identity.” I think that means it’s where you watch yourself crying in the mirror. As for the toilet specifically, Biennale curator Rem Koolhaas and his researchers, consider it to be the “ultimate” architectural element, “the fundamental zone of interaction–on the most intimate level–between humans and architecture.” So the next time that burrito doesn’t sit right or you had one too many gin and tonics, remember that you’re experiencing a corporeal union with the mother of all arts. Potty humor aside, the privatization and proliferation of the bathroom has really driven new developments in cleanliness and safety and has shaped our buildings.

The flush toilet was invented in 1596 but didn’t become widespread until 1851. Before that, the “toilet” was a motley collection of communal outhouses, chamber pots and holes in the ground. During the 11th-century castle-building boom, chamber pots were supplemented with toilets that were, for the first time, actually integrated into the architecture. These early bathrooms, known as “garderobes” were little more than continuous niches that ran vertically down to the ground, but they soon evolved into small rooms that protruded from castle walls as distinct bottomless bays (such a toilet was the setting for a pivotal scene in the season finale of “Game of Thrones”). “Garderrobe” is both a euphemism for a closet as well as a quite literal appellation, as historian Dan Snow notes: “The name garderobe – which translates as guarding one’s robes – is thought to come from hanging your clothes in the toilet shaft, as the ammonia from the urine would kill the fleas.”