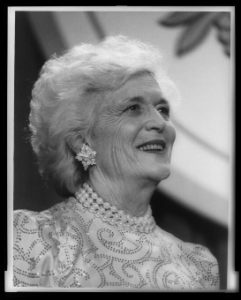 Commencement speeches are as much a part of a modern first lady’s job description as hosting state dinners and reading to school kids.

Michelle Obama averaged almost six per spring. Lady Bird Johnson, known to be terrified of public speaking, still managed to exhort 16 graduating classes not to be afraid to pursue their dreams.

But no president’s wife in a scholar’s robe ever sparked as much attention as Barbara Bush’s appearance before Wellesley’s Class of 1990. The three big networks carried the speech live, followed by the kind of commentary usually reserved for a State of the Union address.

“I believe it was the first, last and only time all three networks interrupted regular programming to cover a first lady’s speech live,” Edward McNally, a speechwriter in the Bush White House, recalled Tuesday, hours after Barbara Bush died at 92. “It was an unusual national moment, to say the least.”