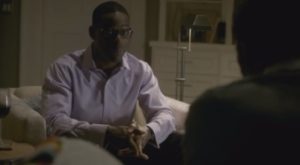 One of most moving love stories on NBC’s This Is Us is between a grown man and the father he’s just met.

On his 36th birthday, affluent family man Randall Pearson (Sterling K. Brown), adopted as a baby, finds his birth father, recovering addict William (Ron Cephas Jones), only to learn he’s dying of cancer. Randall, who first taunts William with his success, quickly changes course and tries to forge  a relationship in the limited time they have.

“There’s a lot of truth in family relationships,” says Jones, explaining its appeal.  “They’re just so raw and on the surface with this show that I think people are relating to that.”