By: John Rampton
writing for Entrepreneur.com 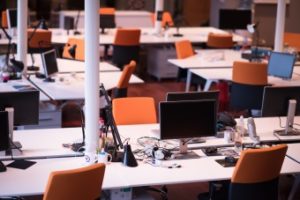 For as long as there have been businesses in operation, leaders have been looking for ways to boost productivity in the workplace. In 1856, the British government conducted a report on office space layouts. The report said, “For the intellectual work, separate rooms are necessary so that a person who works with his head may not be interrupted; but for the more mechanical work, the working in concert of a number of clerks in the same room under proper superintendence, is the proper mode of meeting it.”

Fast-forward to 1906 and the opening of the Larkin Administration Building. Dubbed the first modern office, the building was designed by Frank Lloyd Wright and highlighted an open office plan. The open-office concept continued throughout the 20th century, but it really took off in the 2000s, thanks to tech giants like Google, Apple and Facebook embracing the open layout.

When Facebook unveiled its new campus in 2012, Mark Zuckerberg claimed it would be “the largest open floor plan in the world.” The campus, which is actually a single room stretching 10 acres, was designed by architect Frank Gehry.

That may be true in some cases, but most employees don’t share the same excitement. In 2015, The Washington Post published an article that boldly stated that the open-office trend “is destroying the workplace” at places like Google because it’s too “oppressive.” In 2017, The Wall Street Journal reported that Apple wasn’t happy with the open-office design: “Coders and programmers are concerned that their work surroundings will be too noisy and distracting.”