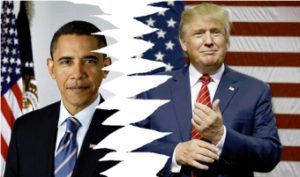 President-elect Donald J. Trump met with President Barack Obama at the White House on a Thursday in November to address next steps in this historic presidential handoff. Trump said in his victory speech(link is external) that it is time for the whole country to “come together as one united people,” and Obama pledged Wednesday that he would not allow his ideological differences with the Republican business mogul to interfere with a “smooth transition so that [Trump] can hit the ground running” on January 20.

This transfer of power has been an inevitability since George Washington passed off the presidential baton to John Adams, but it only became formalized in more recent years. Political parties(link is external)carried the burden of transition costs for their winning nominees up until the 1960’s, when Congress began to consider federally funding the presidential power shift. Florida Rep. Dante Fascellargued on the House floor(link is external) in 1963 that it was improper and unnecessary to have the winning presidential ticket “going around begging for money to pay for the cost of what ought to be legitimate costs of government.”

The Presidential Transition Act(link is external) thus became law in 1964 to “promote the orderly transfer of the executive power” and allow Congress to appropriate $900,000 for the operation. Following the general election, that money could then be used by the president-elect to pay the salaries of transition operatives, hire outside consultants and rent necessary office space, among other, more minor costs.

The act received little review in the coming decades except to increase the necessary funding, which rose from(link is external) $900,000 to $3 million in 1974 and to $5 million in 1988. Most recently, in advance of the 2012 presidential election, Obama’s administration requested $8.95 million(link is external) for the potential Obama-Romney transition, but that money was later returned to the Department of the Treasury when the president won re-election.

Enforcement of the Presidential Transition Act has been somewhat less consistent, though, with the 2000 election creating many headaches for Congress in distributing the transition funds. Because the final results of the race were scrutinized and contested for weeks, President-Elect George W. Bush had to wait until mid-December to receive the money, costing him crucial time in the lead-up to his inauguration.