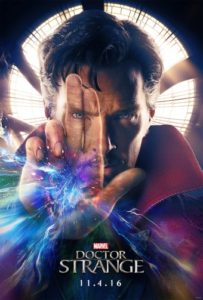 It takes a true Sorcerer Supreme to turn the streets of Manhattan into a grand magic show.

It’s a frigid early April Sunday morning, and six blocks of Madison Avenue have been cordoned off for the last day of filming Doctor Strange (in theaters Nov. 4), Marvel Studios’ latest superhero flick that introduces British star Benedict Cumberbatch as the title neurosurgeon-turned-wizard. Cars are parked at the red light, city folks stroll by, but things are not what they seem.

Doctor Strange and fellow spellcaster Karl Mordo (Chiwetel Ejiofor) are being chased through the streets by the villainous Kaecilius (Mads Mikkelsen) and his evil zealots, who’ve just torn apart the good guys’ Sanctum Sanctorum in Greenwich Village. But no passers-by notice this magical battle because the primary players are in what’s called the Mirror Universe.