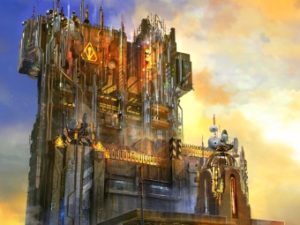 There’s a scene in Guardians of the Galaxy Vol. 2 (in theaters now) where a planet-jumping Yondu (a blue-skinned Michael Rooker) warns Rocket (Bradley Cooper’s genetically modified raccoon) that “it ain’t healthy for a mammalian body to hop more than 50 jumps at a time.” Regardless, the heroes pinball through 700 planets, their faces distorted along the way.

Yeah, the new Guardians of the Galaxy — Mission: Breakout! ride felt kind of like that. I previewed Disney’s renovated California Adventure Park attraction ahead of its May 27 opening. As a result, I’m writing this feeling giddy, lightheaded and hoarse.

Did I scream? Yes. Did the G-forces make my stomach feel weird? Definitely. Did I laugh? Hysterically. Did people ask me if I was OK afterward? Several, yes. Do I regret riding? No way.

The high-speed elevator attraction, which is included in the price of a park ticket and replaces the longstanding Twilight Zone Tower of Terror (which is still standing at Disney’s Hollywood Studios in Orlando), is more thrilling than its predecessor all around. It has more humor (courtesy of the Guardians’ quirky dialogue), speedier drops (the first one is a doozy), better technology (the animatronic Rocket is lifelike) and catchier music (there are six song options inspired by Peter Quill’s Awesome Mix) than before. It’s the first ride in what will become an expanded superhero universe in the park.