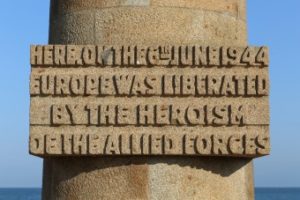 During World War II (1939-1945), the Battle of Normandy, which lasted from June 1944 to August 1944, resulted in the Allied liberation of Western Europe from Nazi Germany’s control. Codenamed Operation Overlord, the battle began on June 6, 1944, also known as D-Day, when some 156,000 American, British and Canadian forces landed on five beaches along a 50-mile stretch of the heavily fortified coast of France’s Normandy region. The invasion was one of the largest amphibious military assaults in history and required extensive planning. Prior to D-Day, the Allies conducted a large-scale deception campaign designed to mislead the Germans about the intended invasion target. By late August 1944, all of northern France had been liberated, and by the following spring the Allies had defeated the Germans. The Normandy landings have been called the beginning of the end of war in Europe.

After World War II began, Germany invaded and occupied northwestern France beginning in May 1940. The Americans entered the war in December 1941, and by 1942 they and the British (who had been evacuated from the beaches of Dunkirk in May 1940 after being cut off by the Germans in the Battle of France) were considering the possibility of a major Allied invasion across the English Channel. The following year, Allied plans for a cross-Channel invasion began to ramp up. In November 1943, Adolf Hitler (1889-1945), who was aware of the threat of an invasion along France’s northern coast, put Erwin Rommel (1891-1944) in charge of spearheading defense operations in the region, even though the Germans did not know exactly where the Allies would strike. Hitler charged Rommel with finishing the Atlantic Wall, a 2,400-mile fortification of bunkers, landmines and beach and water obstacles.