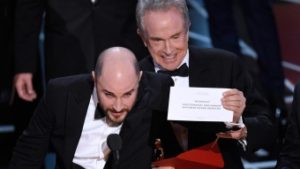 By now you have probably seen the Oscar screw-up in which Warren Beatty and Faye Dunaway where given the wrong envelope and falsely announced that “La La Land” had won the Academy Award for best picture. It was a very unfortunate mistake, one I think the majority of the public felt bad about and understood that mistakes happen (Steve Harvey was forgiven for his similar screw-up at the Miss Universe 2015 pageant).

However, the accounting firm, PricewaterhouseCoopers (PWC), who was responsible for handling the correct envelopes, did not handle the service recovery of the debacle as well is it could have. I know personally that PWC prides itself on providing excellent customer service. Initially they did the right thing and released a statement claiming to take “full responsibility” for Sunday evening’s Oscar screw-up in which one of their accountants made the mistake. They should have stopped while they where ahead. The only other thing they needed to do was share how the mistake happened and what they will do about it going forward to ensure it never happens again.