By Chris Jacob writing for Gizmodo 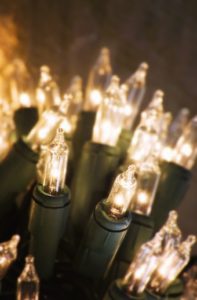 Thomas Edison was known for his wacky publicity stunts, but during the Christmas of 1880 he went for the sentimental rather than shock value. That year, instead of electrocuting an elephant, he brought us the first electric Christmas light display.

By the time 1880 rolled around, Edison had his incandescent light bulbs pretty well figured out, and was on the lookout for a way to advertise them. Brian Murray’s article “Christmas Lights and Community Building in America” [PDF] describes Edison’s marketing trick during that holiday season. To display his invention as a means of heightening Yuletide excitement, he strung up incandescent bulbs all around his Menlo Park laboratory compound [PDF], so that passing commuters on the nearby railway could see the Christmas miracle. But Edison being Edison, he decided to make the challenge a little tricker by powering the lights from a remote generator eight miles away.

Two years later, an Edison crony named Edward Johnson displayed the first electrically illuminated Christmas tree at his home in Manhattan. The then-impressive 80-light display girded a very unimpressive Charlie Brown Christmas tree (I mean really, look at that thing). And as you might expect, Johnson’s feat was also intended as an advertising tool [PDF].