Where the Wrigley Field Rooftop phenomenon began! Since 1914, the 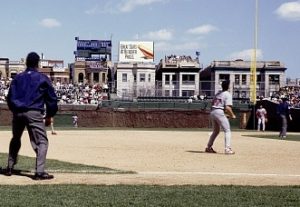 nearby rooftops of adjacent residential buildings have been used to view Chicago Cubs baseball games or other major events at historic Wrigley Field. The term “Wrigley Rooftops” has been used primarily by sports crazed Chicagoans for the past several decades to describe the beautiful structures surrounding the ballpark which have become an extension of the baseball and concert experience at Wrigley Field.

The rooftops had long been a unique and primitive way to experience the Chicago Cubs baseball games with informal gatherings of a few lucky fans and neighborhood folks perched atop the buildings lining Sheffield and Waveland Avenues. These fortunate fans would sit on coolers, folding chairs, garden furniture, overturned buckets or blankets to buffer the hot tar of sun scorched roofs just to see a Cubs game. Access was generally granted to guests of building owners and their tenants by climbing through the top floor attic of a residential apartment. For several decades, Cubs broadcasting legend Harry Caray would say “hello” to the familiar Wrigley Field rooftop fanatics during his televised broadcasts on WGN. Thus, getting invited to a rooftop became a coveted prize, like winning a secret Cubs fan lottery.